LEI was nationally and internationally recognised for its superior project management skills.

In 2019, LEI was awarded in the “People and Community” category of the Asia Pacific Spatial Excellence Regional NSW Awards for 2019, attributed to the Indonesia PMAP7 team from the MCA-Indonesia project. This award recognised the dedicated project engagement approach where the LEI project team made a difference to issues affecting communities via ‘grass roots’ initiatives and services through spatially enabled products and services. 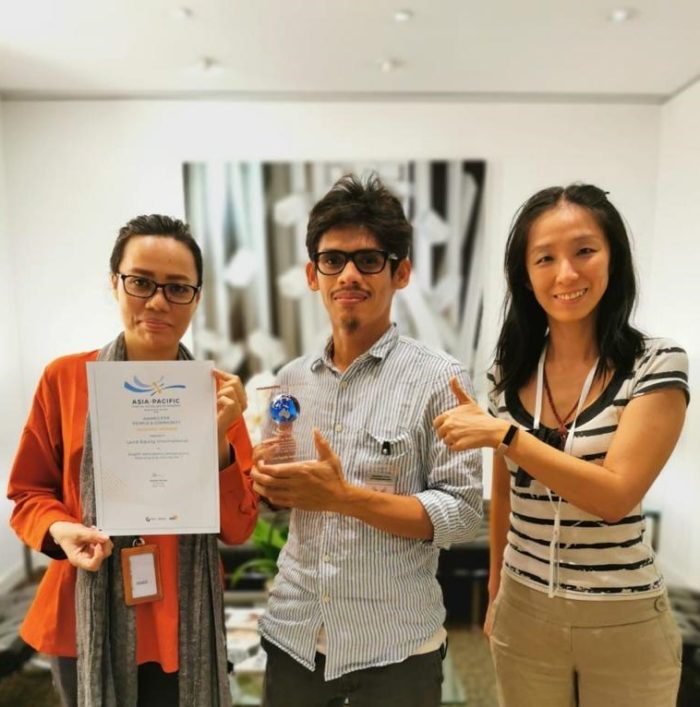 Above: Our colleagues Imelda, Razi and Ophelia (PMaP 7).

In 2006, LEI was awarded the NSW Department of State & Regional Development Export Award as a part of the Illawarra Small Business of the Year Awards. These awards are considered the largest celebration of business success and endeavour in regional Australia.

LEI has extensive experience in developing and implementing community participation activities and involving women and disadvantaged groups in community consultation processes. In 2005, LEI was awarded a Certificate of Merit from the Government of Lao PDR in recognition of its superior performance in undertaking the Lao Land Titling Project (LLTP). A Social Assessment Survey following the LLTP stated:

“The women’s sector has arguably received the greatest social benefit from the LLTP. Separate FGDs for women in all the served provinces attest to the effectiveness of the LLTP, especially the Gender and Development component of the Customer Relations Services (CRS), in raising awareness of women over their rights to inherited and conjugal property and their indispensable participation in decision making over the use, transfer, and sale or mortgage of these lands. An indicator for the empowerment of women is the increased number of land titles placed under their name or jointly with their husband’s in the six served provinces. Compared to unserved provinces, the first six provinces have made considerable progress in this regard.”

Also in 1997, key LEI staff were presented with the World Bank Award for Excellence for implementation of the Thailand Land Titling Project.