Seeds for Growth on the Indigenous side of ‘the gap’: creating the Allodial Land Use Registry

The Allodial Land Use Registry is a web platform which stores, processes and provides access to recordings pertaining to allodial land ownership, land use permits and sub-leases of First Nations. The registry is creating potential to facilitate economic independence of many Indigenous peoples’ globally through their allodial lands. 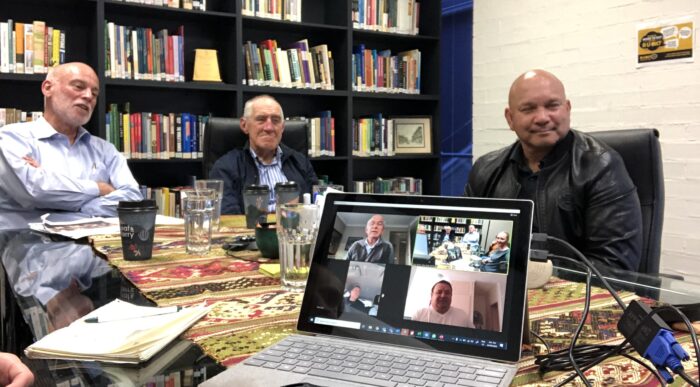 With an extensive history of facilitating equitable access for people to land all around the globe, we felt well placed to assist the Treaty Council of Australia in developing a system for recording land use permits for lands owned by First Nation people. At the time, international travel halted due to the global pandemic and our land administration specialists were able redirect time and expertise to support domestic land issues.

The Treaty Council, the creator with Land Equity of the Allodial Land Use Registry (ALUR), is a central commission supporting First Nations’ sovereign right to control their own country and generate economic independence from the state. Depicted in the map below, are the 500+ First Nations on the continent.

What is the Allodial Land Use Registry?

The registry was conceptualised by the Treaty Council to help communities to record land use relationships existing in their First Nations. The registry software has been customised by Land Equity International (LEI) as a proof of concept prior to wider data integration and roll out for First Nation users. The registry is a web platform which stores, processes and provides access to recordings pertaining to allodial land ownership, land use permits and sub-leases of First Nations.

From the secure portal of the registry, Certificates of Allodial Ownership can be issued through a request acknowledging the traditional practices of identification and approval. The registry platform technology, being open-source, and advisory from LEI, has kept establishment costs to develop the working ALUR to a minimum. The registry has been developed on the assumption that through a broad uptake of the ALUR across many First Nations, it can be sustainable and self-funded through permit application fees.

‘Allodial’ refers to an original right to land, ownership clear of any superior landlord. The allodial rights to land exist free and prior from ever being granted by the crown. Since there was never a formal treaty between the crown and First Nations of the continent referred to as Australia, the sovereignty of the land was never ceded and therefore, the land was never truly the Crown’s to grant or administer. Allodial land rights fill the void where the 1992 Mabo decision refuted the concept of a ‘Terra Nullius’ across Australia at the time of colonization.

In 2009 the Government of Australia signed up to the United Nations Declaration on the Rights of Indigenous Peoples[i] (UNDRIP) under the Rudd government. UNDRIP is a charter which champions the rights of Indigenous peoples to enjoy: freedom from discrimination; self-determination; autonomy and self-government in local affairs; maintain and strengthen distinct political, legal, economic, social and cultural institutions; revitalize cultural traditions and customs; the rights to lands, the development of lands and resources which they have traditionally owned, with the protection of the state; the right to restitution or equitable compensation for misuse of land without prior, informed consent; and the right to develop intellectual property over cultural heritage and traditional knowledge (UNDRIP Articles 2,3,4,5,11,26, 28 and 31 respectively).

Twelve years have passed since initial targets were set in 2008 to ‘close the gap’: a National call for equality for Aboriginal and Torres Strait Islanders. Since 2008, only two of seven targets have been met. In July 2020, a new scheme consisting of 18 targets was created[ii]. Of the targets, one specifically addresses the need to increase the land and sea rights for Indigenous people. The ALUR aims to provide a strong basis for Indigenous People to develop their economic independence to facilitate tangible, positive action for First Nations across the continent on the Indigenous side of ‘the gap’.

How does the registry work?

To develop the initial registry, LEI supported a migration of existing ALUR data to a customised open-source land administration software built on SOLA Community Server to allow spatial and textual data and transactions to be recorded over all land tenure including allodial tenure. SOLA “Community Server” is a United Nations Food and Agriculture Organisation (UNFAO) developed software. The customised platform has a portal publicly accessible via the website: https://alur.world.

The easy to use software utilizes google earth to display clear map layers, and offers customizable options and recordings to suit the needs of different First Nations (Figure below). LEI is supporting initial customisation to test the application and suitability of the software for wider data integration and roll out of First Nation users.

Currently, the ALUR documents the land and sea around the Cape York peninsula as a proof-of-concept phase. We expect the ALUR can be rolled-out across the continent with a vision to encompass all 500+ First Nations. The ALUR will record data on two levels: 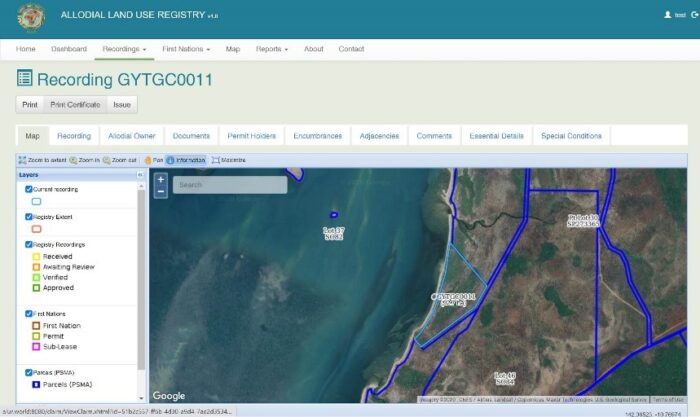 It is expected that communities, businesses and government will come to rely on ALUR information for identifying allodial owners and current allodial permits. The information can be used for a variety of purposes including land management, conveyancing, property development, investment, local planning, economic and social development, and historical research.

The need for an Indigenous registry

Part of the passion for the ALUR initiative is born from a frustration with the shortcomings of the current system of Native Title. The 1993 Native Title Act was a step in the right direction for legally recognising Indigenous people’s land rights. It facilitated some economic opportunities for Indigenous people. But, Native Title procedures and processes have not enabled Indigenous People to use their land assets in Australia as the basis for long-term sustainable social and economic development in the same way that non-Indigenous Australians can do very successfully. The Timber Creek compensation case in 2019, is evidence of the Native Title inadequacy. The Timber Creek case was the first assessment by the High Court of compensation for the extinguishment of Native Title rights and interests under the Native Title Act[iii].

There is a need for an improved system for the benefit of both Indigenous and non-Indigenous people in Australia. It was reported recently that the Rio Tinto CEO had $5million in bonuses cut because of the Juukan Gorge case[iv]. One of America’s largest engineering firms in 2018 pulled-out of stakeholder support for the Adani Carmichael coal mine[v] where controversial Indigenous land rights and environmental issues were contributing factor to major declines in stakeholder support. There is incentive on both sides for the implementation of a better system for industrial planning, awareness and corporate social responsibility, which a sophisticated Allodial Land Use Registry aims to facilitate.

With environmental cutbacks on regulation as cash boosts are used to stimulate the Australian economy during the pandemic, there is no time left for Indigenous peoples to wait for legislature reform. With a history of the state failing Indigenous people in their equitable rights to land, there is no certainty that a reform will be truly beneficial. The ALUR represents positive Indigenous action to close ‘the gap’ by addressing a gap in economic mobilisation of allodial land owners, rather than waiting and depending on the ‘other side’ to do it for them.

Other First Nations around the world, in similar positions to First Nations peoples’ in Australia, require technical assistance to record their Allodial Land rights. The scalable, replicable and customisable design of the ALUR means it could be used as an international tool. A transferrable and sophisticated system of mapping and permits recording, has the potential to facilitate the economic independence of many Indigenous peoples’ globally.

We welcome you to visit and login to the registry site: http://alur.world

A Pilot Project for Land Registration