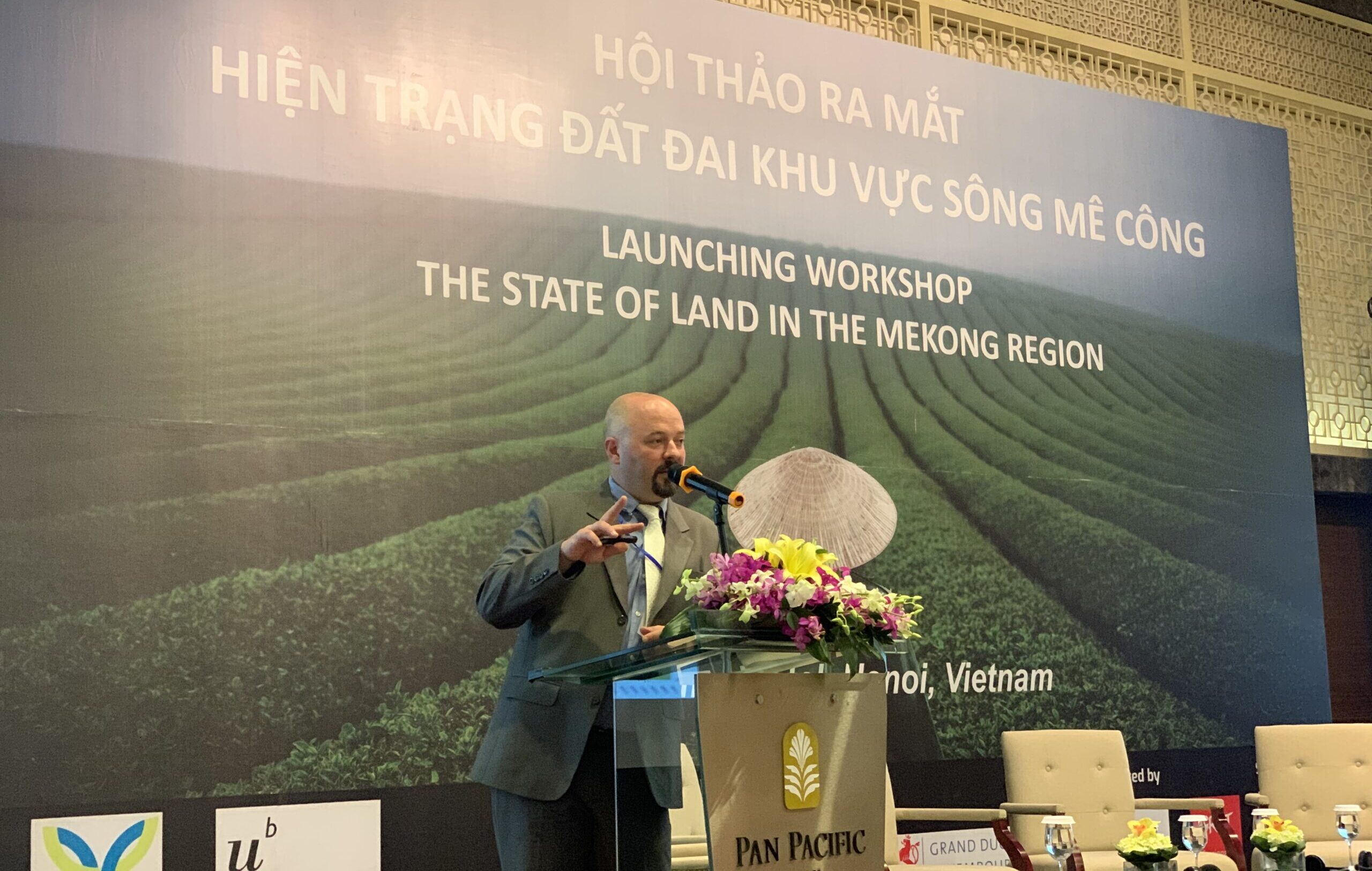 Hi Micah, you joined the MRLG project as Team Leader back in October 2020. We’re just on six months in – how has your experience been so far?

Thanks, Kate, and nice to talk with you. All things being equal, the transition has been really smooth. As you know, I came into the Mekong Region Land Governance Project (MRLG) amid the Covid-19 pandemic, when things in Vientiane were just beginning to reopen. The borders remain effectively closed so this makes for a difficult situation trying to run a regional project. But I have an amazing team—some of the best people I have worked with.

The project has been running now for two years and the team has a good idea of where they are going, and how they plan to get there. Still, it is quite a challenge, covering several countries and a variety of issues, all of which we are trying to work out together with around 80 institutional partners. So, it’s pretty wild. Oh, and I had a baby just a couple months after I started, which threw a spanner into the works. Fortunately, he was born on a Friday, so I was able to take the weekend off and be back to the office by Monday.

You’ve held a number of senior leadership roles in the lead up to your current position – how have these prepared you for the MRLG role?

That’s quite an interesting question. I have been working in the Mekong region now for almost two decades, with a lot of lateral movement between different kinds of institutions and sectors—everything from small, civil society groups to UN agencies to scientific research institutions, and from environmental conservation to law reform. Looking back at this, I think this has really taught me to see things from many different perspectives, both institutionally and technically. This is really what MRLG is all about, bringing very different actors together—activist groups, government agencies, donors and the private sector—to work toward a common vision: a better and more inclusive future for smallholders in the Mekong. As you can imagine, there is also a lot of negotiation going on, trying to find this common ground. I think my background has really helped because it is easier to see where people are coming from and how we can come up with solutions together.

You held a key role leading the development of the first State of Land in the Mekong Region report – and in this phase are building on this. Can you let us in on some of the key directions you are taking?

Yes, and I should also say working on the first State of Land was a nice springboard for launching into MRLG. When we did the first edition, we were really wrestling with a project that was extremely broad in scope, covering a lot of topics—some 60 different indicators—flying at 10,000 feet. We also wanted to focus on description, showing what is happening in the Mekong and why it matters. This included analysis of key dynamic processes, such as the condition of land resources, how (un)equally these were distributed, how these have changed over time, and what appears to be driving change. Among other findings, some of the most significant included how much land is concentrated among a small number of land holders (for example, in Vietnam 10 percent of land holders control 40 percent of land), or how just six crops account for 80 percent of all agricultural land. However, we avoided being too prescriptive. This phase, we are really drilling down to the crucial details of some of the issues we highlighted in the State of Land, teasing out the implications for policy and proposing some solutions.

What else is taking up your time at the moment?

Well, my son is now two months old and, between him and his older siblings (there are 6 in total), they are really giving us a run for our money. Fortunately, my wife is incredible, managing the little guys while also teaching the older kids at home. On the work front, we have been moving along well with the project activities, developing tools and policies at multiple levels to enable better protections for smallholders and land governance overall. For example, through our alliance we have been working with the ASEAN Secretariate to develop new guidelines for the recognition of customary tenure, while in Vietnam we are working with government agencies to assess the current Land Law and propose reforms, as we did previously in Lao PDR on both the Land and Forest Laws. In Cambodia, we are working toward mainstreaming FPIC (Free, Prior and Informed Consent) into protected area zonation processes, to protect smallholders from losing their land to conservation enclosures. Throughout the region we are working with government agencies, civil society groups and the private sector to implement ASEAN Guidelines on Responsible Agricultural Investments, which has been very well-received. These are just a few examples out of dozens.

Through all of this, we have had great support from alliance members, and we are really starting to see MRLG’s proof of concept emerge—we really are better when we work together. Unfortunately, we were hit broadside by the coup in Myanmar last month. This was really not what we or anyone expected. Many of our alliance members there have been working on some tricky topics, trying to build inroads with progressive government leaders. Of course, most of these were from the National League for Democracy so this was all swept away on the first of February. So we have been fighting fires there, doing what we can to support our team and alliance members and trying to get a clearer idea of where things are going. It is a very complex and fast-moving situation. As a project, it is also a bit tricky because the stakes are now higher. Our team there has held up remarkably, however we continue to monitor on a daily basis.

MRLG provides an ongoing platform for dealing with land challenges in the region. You bring a wealth of expertise in the climate change and biodiversity fields – are there any landmark developments in this space that you’re excited about?

Really glad you asked that. I think the conversation between the land rights crowd and the conservationists has come a long way in some respects, but we continue to bump up against the challenges of trying to ‘do conservation’ while at the same time protect the livelihoods and interests of farmers. The science is starting to show us a very clear picture, that we can actually do conservation better where it is done hand in hand with farmers and communities, and there are ways to really achieve both better livelihoods and more resilient natural systems. Climate change has in some ways brought us together because the links between humans and the earth systems have become so palpable. I think the biggest challenge is how this is worked out in practical terms. There are many actors in this space with skin in the game. Conservation has become a big industry and increasingly done through government agencies, sometimes with questionable commitments and accountability. So there is a lot of money flowing through channels that are a bit opaque, and where competing interests are at stake. What is most promising, I think, is that we are seeing an uptick in conversations across this space—more conservationists open to working with farmers, and more development practitioners who are waking up to the need to conserve our world’s vital ecological resources. It’s all really exciting, but we still have a long way to go. For me, getting to work on this day-to-day and support these guys, it’s really a privileged place to be.